The aim of National Telephonists’ Day is to recognise and appreciate the fantastic contribution professional telephonists make to organisations across all business sectors, promoting the important role that they do.   Often they are the first point of contact a client has with an organisation and the telephonists therefore have a huge responsibility to create the right first impression.

National Telephonists’ Day was launched by Rapport and ComXo, two of the UK’s leading providers of in-house and outsourced telephone services who employ a combined total of over 150 telephonists across the UK.

The sixth annual National Telephonists’ Day will be celebrated on Friday 8th March 2019, with competitions sponsored by Rapport and ComXo running from 8th to 10th March.  The date of 10th March is significant as it is the anniversary of the very first telephone call made by Alexander Graham Bell in 1876.

There are many ways that organisations can take part, including in the national competitions with amazing prizes to be won.

Have a look at the photos from the last few years where businesses up and down the country have really taken this initiative to heart! 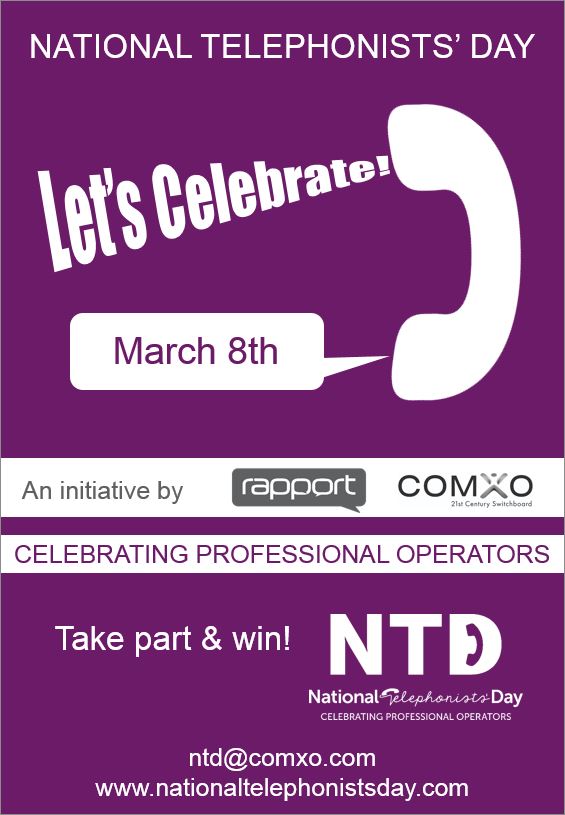 UK's leading provider of high quality front and back of house Guest Services. Providing in-house telephony services on receptions, switchboards and other call services for a range of blue chip clients who have chosen to outsource this business critical area.

“Our telephonists are often our guests’ first point of contact with our clients’ organisations and we appreciate how hard they work to ensure that they make a brilliant first impression. Launching National Telephonists’ Day was a chance for us to celebrate the great work they do and to raise their profile within our operations. We hope that every single telephonist who takes part will feel proud about the important job they do."

ComXo are the voice of 200+ professional service firms across the City of London and beyond. Experts in delivering an exceptional client experience at the first point of contact, 24seven365 and multi-lingual. Skilled operators assisted by world-class technology provide bespoke switchboard services, fit for the 21st Century global law firm. With more than 40 top 100 law firms among their clients, and relationships stretching back 15 years, they have developed in-depth knowledge of the legal sector.

“Telephonists are the unsung brand guardians for thousands of businesses up and down the country.  Our customers use us because they know that their brands first impression is often a defining moment of a new business relationship that must reflect exceptional service and trust. This day is a chance for us to bring the uniquely challenging nature of the professional Telephonists skills and responsibilities to the fore and celebrate it.”